History of the Georgia Southern Museum

Charles Austin, vice-president for academic affairs, created the museum on July 1, 1980. He designated space for it in the Rosenwald Building, which was built in 1937. Until 1975, the college library was housed in Rosenwald, and faculty meetings were held in the rotunda. The building is the only campus structure named for someone not directly associated with the college or community. Julius Rosenwald (1862- 1932) was one of the nation’s best known philanthropists and business leaders. He was the vice-president and treasurer of Sears, Roebuck and Company from 1895 to 1910, the president from 1910 to 1925, and chairman of the board from 1925 until his death. Assets from The Julius Rosenwald Fund were earmarked for the support of minority and developing colleges and institutions. 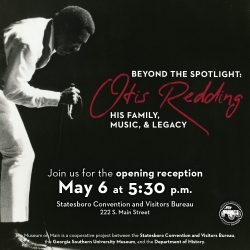 Join us to officially open the Museum's newest Museum on Main exhibit: Beyond the Spotlight: Otis Redding His Family, Music, and Legacy and speak with the Curators & Designers, Located at the Statesboro Convention & Visitors Bureau
Monday, May 6, 2019
5:30 - 7:00 p.m.