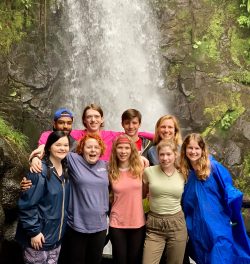 Costa Rica has become a popular spring break destination for many college students in recent years. Countless planes fly into the capital city of San José where passengers depart and make their way to the closest white sandy beach in the most popular resort hotels. There are some students, however, who have taken a different path after entering the country. Some of those students are from Georgia Southern, and for the past five years, they have flown into San Jose and then made their way to the small town of La Carpio where they have dedicated their spring break to serving the Nicaraguan refugee community.

“Project Pura Vida! Honors in Costa Rica” is led by Doctora Leticia McGrath (Spanish), who approached the University Honors Program in 2014 to develop a volunteer trip in partnership with the Costa Rican Humanitarian Foundation, a group she had met on an earlier study abroad trip.

“I continue to be inspired to watch Georgia Southern Honors students who are willing to give up their free time, their spring break, no less, to serve others and to bring the lessons they’ve learned back home and apply them here locally,” Dra. McGrath said.

That approach also defines the focus of her Honors First-Year Experience (FYE) courses as well, and those discussions have prompted students in the class to join in the trip, often during their freshman year. Bailey Kirk (mathematics ’18) was one of the students who went on the very first Pura Vida trip. Her time in Dra. McGrath’s Hispanic Culture through Film FYE course sparked the her interest in global citizenship and gave her the perfect opportunity to fulfill one of her dreams of travelling with Georgia Southern University.

Kirk’s participation in this first trip inspired her to go again the next year as a trip leader. “My responsibilities focused on keeping the group organized, prepared, and involved. When we were volunteering or in the community, I would make sure that the group was comfortable and knew exactly what to expect,” she said.

Of the numerous opportunities and adventures she had on these trips, her most memorable experience was being able to watch baby sea turtles hatch on the beach at Manuel Antonio National Park. “It had been an emotional trip and this felt like a sign that it was all worth it and this trip was meant to never be forgotten. Plus, it was amazing to be walking and just randomly stumble on an unknown sea turtle nest beginning to hatch,” Kirk said.

Other students have participated in this trip and been inspired to become trip leaders as well. Bodie Fox (writing and linguistics ’20) wanted to go a second time, but as a trip leader so that he could teach some of the new students about what he had learned the year before.

On his second trip, Fox appreciated the shift to more direct service that made a visible impact in the community. He also enjoyed being able to spend more time with Gail Nystrom, director of the Costa Rican Humanitarian Foundation, and being able to ask her more direct and focused questions on the operations of the Foundation.

One of the most rewarding experiences that Fox had on the trip was being able to help a woman and her family move into their newly built house. Fox connected with this family due to their passion for books. “It was so rewarding to hear how proud this woman and her children were of their book collection, which totaled over 500 books,” he said.

Throughout the years of this trip, Dra. McGrath has been able to see rewarding changes throughout the La Carpio community. “The most notable change is the fact that many of the children who have been educated in the Montessori school run by the Costa Rican Humanitarian Foundation are now in high school and are succeeding,” she said. “Watching the children grow year after year has to be the most rewarding experience for me. That, and knowing that they are thriving and being cared for in a safe environment.”

Kirk also noticed some of these changes in her multiple years of participating in the trip. She said, “It was amazing for me to walk around La Carpio and see how much had changed in just one year, even though there were things that seemed so simple, such as bagging their garbage and bringing it to a specific area. There was also the difference in buildings becoming permanent and being able to see the investment people had made to continue growing their community.”

While these students are clearly making an impact in this community, the experiences and lessons that they learn in Costa Rica are being brought home and implemented in these students’ communities, as well.

McGrath said, “We have communities in our local hometowns that are often ignored or discriminated against, just like La Carpio, and it is clear to me that this experience has inspired my students to return to their own cities to seek ways in which they can provide hope, encouragement, and a helping hand where perhaps before they had never thought to do so. Student’s newfound perspective is the direct result of their having the opportunity to view this in another country with different ethnic groups and removing themselves from the equation to step back and see how universal the issues of poverty, discrimination, and immigration truly are.”

Georgia Southern’s continuous involvement in Project Pura Vida has had a tremendous impact on the community of La Carpio as well as on the students who have participated in the trip over the years. “This and other Alternative Break Trips offered at Georgia Southern are amazing opportunities not only to travel, experience culture, and have an adventure, but also to be able to have impact on people’s lives and be able to see life from a different perspective,” Kirk says.