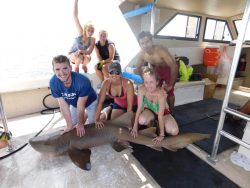 Ever since the release of the 1975 film Jaws, sharks have suffered a negative reputation that leaves many people clinging to the shore. There are some people, however, who say sharks are misunderstood. Second-year student Colton Borresen (biology ‘21) is one of those people, and last summer he joined them in their natural habitat as he worked with the Coastal Marine Education and Research Academy (CMERA) to conduct research about shark and stingray populations.

Borresen holds fond memories of traveling to the beach with his family when he was younger. He often went snorkeling in places such as Florida, Mexico and Aruba where his fascination with marine life began.

“I remember drift snorkeling around the Exumas in the Bahamas with sharks and stingrays only a few feet away,” he said. Naturally, majoring in biology at college was his primary choice.

Borresen heard about the internship with CMERA through the Department of Biology, and was intrigued by the summer program they have in Clearwater, Florida. He especially liked that who worked on research for four weeks or longer would have their name on any papers published by CMERA for that research.

During this internship, students attended morning lectures on topics such as shark and ray anatomy and physiology, ecology and conservation concerns. In the afternoon, students actively participated with research efforts by tagging, measuring and collecting relevant data on both sharks and stingrays that were hauled onto the boat using long lines and tangle nets. The team could bring in as many as 18 shark and 10 stingrays per day which kept them busy. After the animal was pulled onto the boat, the team worked quickly to record this data as well as irrigate the creature to keep it alive before releasing it back into the ocean.

“Because this is a catch and release program, the safety and handling of each animal was a priority,” Borresen said.  Smaller animals were fitted with an identification tag while larger animals were fitted with a satellite tag to track their location. The team encountered a variety of shark species including “bonnet heads, scalloped hammerheads, great hammerheads, black tips, tiger sharks, and nurse sharks” he said. They also caught many species of rays including smooth butterfly rays, southern stingrays, spotted eagle rays, bluntnose stingrays, and cownose rays.

Although there were many exciting experiences, Borresen singled out one day in particular. “One of my most memorable experiences on the boat was catching a 7 ½ foot tiger shark,” he said. “My heart was pounding, but there was not much time to think about it because we needed to work quickly to return the shark to the water. We tagged the shark with a satellite tag, which was provided through generous donations, to track its location.”

Borresen believes this internship will help him with his future ventures in marine biology and plans to join CMERA again this summer for more internship experiences researching the creatures that many people simply misunderstand.